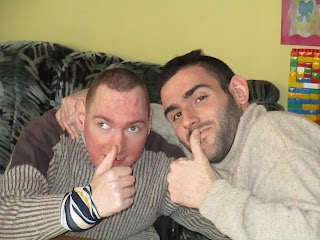 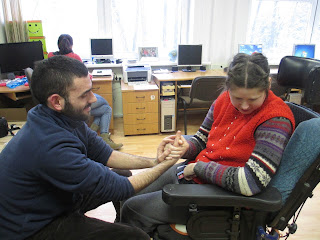 In the third program one student of Sport group participated and in the fourth that same student and two news (one girl of the house keeping group and one boy of ceramic group)
In the fifth (and in the next’s), I worked with every students that had interest in this project.
I started this new format on the first Monday of February.
In that month I changed the group (Alternative Communication).
At the beginning Egle (the name of the main person that coordinate this group) showed me the activities she made with the students.
She worked with the students in two ways:
a) With only one student (She made different mind exercises with the   low-level intellectual students).
b) With the different groups of the center.
After Egle gave me freedom to offer ideas in different activities and sometimes she gave I worked with the students as individual way.
I really liked it.

Sometimes we played Alias together (the assistances and some of the students of different groups).
In this game, they speak only in Lithuanian to I learn it.
I think I enjoy my participation in this group and I´m going to continue in this group till the end of my project.
On February too, I talked to the coordinators of Music Group to coordinate the small discotheque that the center organize in the hall every Fridays at 1 p.m.
They accepted and now I´m the responsible of this activity.
The students of the center are very happy with me and the other volunteers.
They are very grateful and transmit quite love to us.
I remember one very nice experience with one of the students:
The concert of an important Lithuanian band “Lemon Joy”.
I was with my mentor, the social worker of IT group (Egle) and one student of this group (Paulius).
We spent good time and I bought two CDs from the band (One for me and the other for the student). 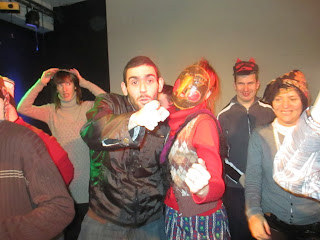 5. How do you feel now and what are your plans after EVS?
Now I feel very good.
I really like this experience. I think it has helped me to grow as person and to open my mind.
After my EVS project, as I said in the question nº2, I´m going to finish my studies of Artistic Photography in my hometown and later I would like to continue to study because the economical situation of my country is not so good.
I think I would study Journalism because my favorite kind of photography is photo-journalism and also I performed several radio projects that I really liked them.
If I study this degree, I will be able to improve in both fields.
6. Do you recommend EVS for young people? Do you think that this is good experience?
I don´t think it´s a good experience, I think it´s a very good experience.
Every young people between 18 and 30 years should participate in this project.
It will be one adventure they won´t forget.